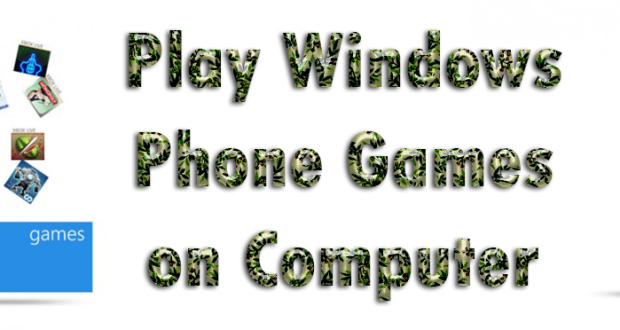 How to Play Windows Phone Games on Computer

Although the market seems to be dominated by Android but still Windows has its own place. They are prominent in Nokia handsets where Android is found to be completely absent. From a personal experience I would prefer Android over WP, but the brand owned by Mr. Bill Gates can’t be overlooked. There is no doubt about the success reached by Windows among the computers but regarding mobile phones, yes, we might need to look twice. Like other operating systems, Windows also provides a set of games and apps for its users. Unlike Android not all of them are supported in laptops but some of the games can be played in laptops. Some people want to enjoy these games in a bigger screen to get a better experience. So we are going to discuss How to Play Windows Phone Games on Computer in this article.

How to Play Windows Phone Games on Computer

Nowadays you can play windows phone games in your laptop via the OS. All you need to do is to have your laptops Operating System as Windows 8. Here you will get the windows store from where you will be able to download games the exact ones available for phones and Play Windows Phone Games on Computer. But before that it is essential to make sure that the operating system which is being used is activated. If it is non activated version, then you cannot download the games from windows store directly.

After downloading the game, install it as per the given instructions. Of course being a laptop you may not get the exact facilities as provided by the mobile phones but still the game can go on. To see the compatible games and exact details of the games, log on to http://windows.microsoft.com/en-us/windows/home.

Here’s a list of games supported both by Windows Phone and laptops. Some of the games are free:

People are often carried away by fake posts speaking about the procedure for playing windows phone games in pc. But it is an utmost request not to follow all this as this ruins your laptops performance. Sometimes many people unknowingly download spywares and other malwares while downloading games and other applications. These files adversely affect your laptop or PC. Moreover spyware get access to your secret passwords from your computer and carries them away over the internet.

Always visit trusted sites to avoid these problems and to Play Windows Phone Games on Computer. But yes, each and every games supported by windows phone may not be supported by Windows in laptops.