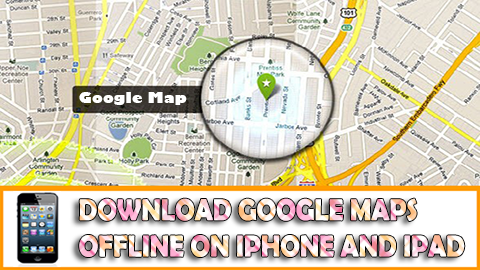 How to Download Google Maps Offline on iPhone and iPad

Google Maps are serving people in the best form. People are really getting benefitted out of it. Now the iPhone and iPad users want to get the Google Maps on their devices offline as they may not have data connection always. So here is the way to get Google Maps Offline on iPhone and iPad.

How to Download Google Maps Offline on iPhone and iPad

Getting the Google Maps:

First and foremost one must know the usage of Google Maps and must be accustomed to the mechanism of it. Now the Google Maps of version 2.0 is available for the iPhone and the iPad users in the iTunes Store. They can easily avail it from there and get to see how it is and what it is all about https://itunes.apple.com/in/app/google-maps/id585027354?mt=8. The iTunes store is providing the users with updated info of Google Maps. Google Maps provide one of the best features that can ever be provided. They let the user save or rather download a part of the map for offline use at any point of time.

Initially, the offline mode of Google Maps was only available for the android users and with time, it has been made possible for the iPhone users as well. These days, the iPhone users will also be able to get a part of the Google Maps offline without having a data connection. The steps to avail this features is very easy and anyone can do it. Firstly, the place that to be saved as the offline mode is to be searched from the Google Maps using the data connection and the GPS. Once it is found, the place has to be zoomed and all the places marked on that area must be clearly visible.

Now, on the search box of Google Maps, “ok maps” has to be typed without the quotes. After typing this on the search box, the “Search” has to be tapped. The portion of the map that is being shown will be downloaded on the iPhone for the offline use. This is the simplest way of how to have Google Maps Offline on iPhone. No other step has ever been so easier and the features are very useful for the users.

There is one drawback of the system that is a large part cannot be saved for offline use. But if the user is clever enough, he or she can zoom different parts and save those to have the entire map. Thus here are the steps to have Google Maps Offline on iPhone.