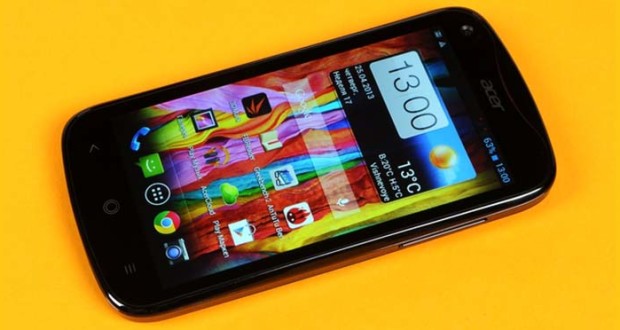 Earlier this year at MWC, Acer revealed its latest Android smartphone – the Acer Liquid E2. This is the third smartphone released by Acer this year after Liquid E1 and Z2. With the Liquid E2, Acer has improved their earlier E1 model by replacing a quad-core processor in place a dual-core one and including the option of two networks with a dual-SIM card slot. Let us take a quick look at the Acer Liquid E2 Features and Specifications. 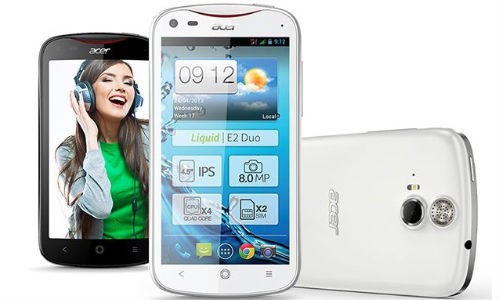 One of the most amazing Acer Liquid E2 features is its large 4.5 inch IPS LCD capacitive display screen. The display has a screen resolution of 540 x 960 pixels and a pixel density of 245 ppi. The qHD display and wide viewing angle of E2’s screen lets you view all the amazing pictures and videos that you capture on it. E2’s capacitive display also supports multi-touch feature. 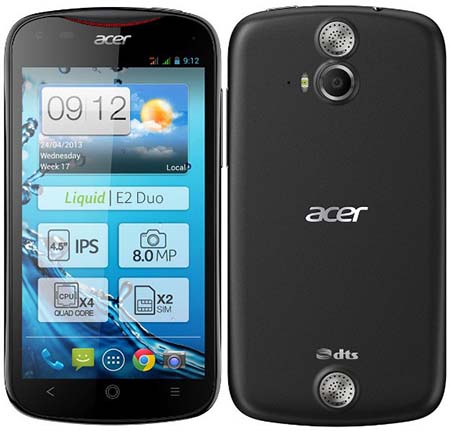 When it comes to hardware, the Acer Liquid E2 specifications definitely pack a punch. The biggest improvement of E2 over its predecessor is its 1.2 GHz quad-core processor. The increased number of cores along with 1GB RAM increases the multi-tasking ability of the device thereby smoothening user experience. E2 also boosts a huge internal memory of 4GB with provision of expansion up to 32 GB via microSD card. In addition the phone has proximity sensors, accelerometer and A-GPS support. The Li-Ion 2000 mAh battery gives E2 enough power to last a whole day of heavy usage. Lastly E2 runs on Android v4.1.2 Jelly Bean OS which is the latest version of Android in the present market.

Another eye-catching Acer Liquid E2 features is its 8 megapixel camera. The camera along with a powerful LED flash and auto-focus feature lets you bright and clear pictures even in low light conditions. With its zero shutter delay, E2’s camera can take up to 8 shots per second. There is also a secondary 2MP front facing camera for video chat and self portrait pictures. Both the cameras are capable of recording full HD videos at 30 frames per second.

The Acer Liquid E2 Duo model supports GSM Dual SIM stand-by. There is support for both 2G and 3G connectivity for browsing and downloading from the internet. The phone also features 802.11 a/b/g/n dual band Wi-Fi and Bluetooth v3.0 with A2DP and EDR.

The Acer Liquid E2 is expected to release by May, 2013 in Europe followed by North America and Asia. You can expect E2 to be available in Rock Black and Classic White. Experts have suggested Acer Liquid E2 Price to be around $300.