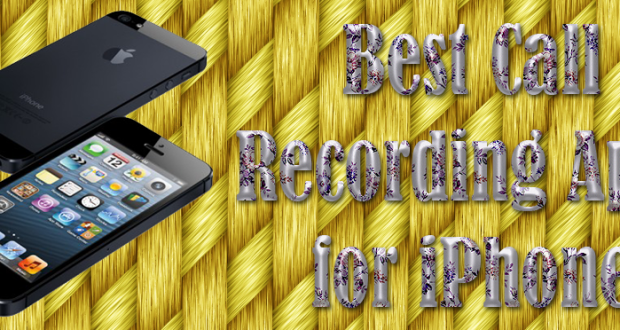 Before the era of smartphones many mobile phones had in-built call recording apps. So when smartphones like iPhone was released without any call recording app, many people were crestfallen. Apple defended themselves by stating that recording calls is against the law in many states of USA. Although that may be true, but one cannot ignore the various benefit of recording calls. Some of the reason why there should be a call recording app in every iPhone are: recording conversation involving legality issue, recording telephonic interviews for future reference towards selecting a candidate etc. So here is a list of 5 Best Call Recording Apps for iPhone:

Developed by Retronyms, the iPhone recorder is the only call recording app that has been officially recognized by Apple Inc. That’s why it can be bought and installed directly from the Apple AppStore. With the iPhone Recorder, you can record only outbound calls. There’s no facility for incoming ones. Calls can be initiated from within the app and the call recorded can be played back later on. You can also share the recorded audio file via Bluetooth and email form the app itself.

Call Log is another item in our list of 5 Best Call Recording Apps for iPhone.  To start operating the app, firstly you will have to open an account. After that it is relatively easy. All you have to do is make a call from the app’s built-in dialer. You can also make your call from your contacts. After a call is placed, it is the app starts recording immediately and stores the recorded file in memory. The only drawback of this app is that only outgoing call can be recorded.

iSpoofCard is a web based app where allows you to record calls along with many other things. Due to the user-friendly web interface and easy online management of recorded calls, iSpoofCard has become quite popular among iPhone users. Other features provided by iSpoofCard are changing the name on caller ID, changing caller’s voice for privacy purpose etc.

With PhoneTap, you call record outgoing calls without any additional hardware or equipment.    In addition, PhoneTap will also note the time and date of each call along with call duration. PhoneTap also lets you send the recorded mp3 file via e-mail any recipient instantly.

Google provides a free service called Google Voice. With Google Voice you can make free calls, send free SMSes and above all, record calls over your iPhone. To access Google Voice, you only need to open an account and have access to a web browser. After making a call, you need to press “4” on the dial pad to begin call recording feature. Both the parties over the call will be notified that the call is being recorded. Currently Google Voice is allowing only incoming calls to be recorded. This ends our list of 5 Best Call Recording Apps for iPhone.